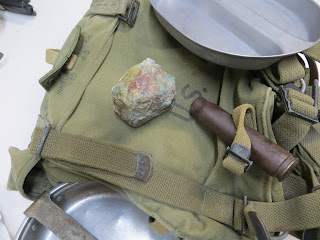 >> Dedicated to the memory of all soldiers everywhere... and to Private George Edwin Ellison, a coal miner and the last British soldier killed in WWI.

This was a free write. When I wrote the first line I did not know the story teller was a WWI soldier.

I dug in the earth, I a miner and a beggar.
The dirt heaved over me, in my bleeding ears, up my bleeding nose
Into my screaming mouth, between my grinding teeth
Into my mouth screaming with the exertion not to die.

My eyes when opened after were bland bloodshot holes
In the mud that covered my face, covered my race
Covered my creed, my persuasion, my passion… me.
My eyes found my stone, my gem, my earth’s offering.

It as well covered with mud, still captured the light;
And I would release it, it’s what miners do… miners.
But not then, the air still screamed, the air from me
And the air above me as the missiles fell.

This mine was only a ditch in the ground
Where we cast our bodies down beneath
The ripping shards, shredding shards of metals
Made from ores long before dug from the earth.

And they kept coming down to rejoin their mother,
These metal canisters of death, exploding around our trench.
My mates calling for their living mothers, calling in their death,
While I only, only the stone calling, my gem, my mother’s offering.

We somersaulted, we crawled, we clawed at the mother
Earth, the mother that shielded us, to reach
The bunker whose entry, half closed by bodies,
Seemed to fade back from us, as more bodies fell.

Taking a small wooden box, was a chair, now a box,
I set the gem in the box, the box in the hole and
Hammered in a beggar’s tin to mark the place;
And I would return and would dig my mine again.

Beggars journeyed from ditch to ditch, bodies fell
Missiles fell, rain fell, everything for all time fell,
And I would sleep and dream of my gem, knowing
A day would come when it would be mine again.

I would dream of washing it pure and applying the skill,
The miner’s skill to cut the stone; a skill I’ve known
All my life no one else knew, my skill with hammer
And blade to cut until the facets ring true for joy.

A day would come when it would be mine again,
But then I awoke in the mud and the smoke
And the ditch and the screaming air, and screamed
And thought the scream was the dream and I slept.

It all stopped one day, the beggars stopped
The stabbing, screaming, falling all stopped,
But not before we had journeyed so far
Our dreams ended, ours dreams ceased, our dreams stopped.

Months slid into years and years decades and I dreamt
Ever fading dreams it would be mine again.
And we beggars sought maintenance and silence
Looking to nail them to the ground, but they floated away.

So I left and travelled for days to be the miner.
The miner again dug in familiar earth, familiar
Like a mother, but not so reassuring
Still the old timbers emerged like a tomb found.

A tomb found, a sarcophagus containing wealth
Unimaginable, a tin, a box, a stone, my gem!
I raced to a stream and washed and laid it in the sun
Not looking, I could not bear to see it for joy. 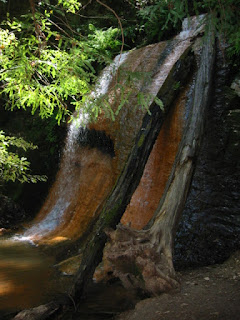 "My cup overflows." This familiar phrase from Psalm 23 reminds us that God does not bless us as much as we need. He blesses us far beyond our ability to contain it. Others have recognized this is much like a "well within us springing up to eternal life", "living water" that splashes everywhere and everyone around us.
Every day the world tells me what a loser I am, and a victim... from without and within I am messed up. When we listen to those lies we cease to be a blessing.
Jesus said, “Everyone who drinks from this water will get thirsty again. But whoever drinks from the water that I will give him will never get thirsty again. In fact, the water I will give him will become a well of water springing up in him for eternal life.” (John 4:13-14)
Then a voice came from the cloud, saying: “This is my Son, the Chosen One; listen to him!” (Luke 9:35)
Let's listen to the Son... and go get wet again.
(photo: Golden Falls at Big Basin State Park )
Posted by Ken at 10:01 AM 1 comment: 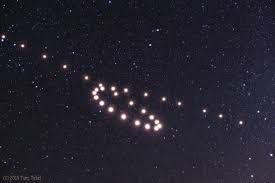 A chief aim of human inquiry is as much to discover the dots as it is to connect them. This is as true for art and philosophy as it is for math and science.
Posted by Ken at 3:08 PM No comments:

Our Joy And Delight 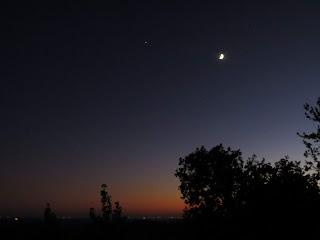 In the late 90s I worked out a first edition of this song on piano, just the first verse (first person singular) and refrain, reverberating for long years in the lost echoes of mid-life mysteries. There it languished until picked up one day by a retired gnome of questionable pedigree who thought perhaps he could once again woo his guitar of thirty years acquaintance, and awaken their sleeping quiet romance of whim and fancy. To his astonishment twenty years later a second verse (first person plural) easily slipped in with augmentation and an entire new chord.
Excitement toward sharing this offering built and a recording ability assembled, but this lowly gnome struggled against his own lack of confidence, lack of vision and predisposition to baptize all creative work in the suds of craft brews, some noble, some not.
Finally at a recent reading, a previously unobserved verse (42:8) leapt into view and provided a coda of lofty expression that demanded a hearing.
So now results this recorded attempt, faulty and fractured as it may be. Following are the lyrics that would have been less obscured from a less obfuscated being. Below them is a link to the recording.
In the Hebrew Bible these two Psalms from the Sons of Kohan (priests) are one. We move from the struggle of faith in the old covenant to its victory in the new... from the struggle of faith in the new covenant to its victory forever - the praise of the Almighty God, Creator and Savior.
All these lyrics are taken directly, or adapted, from scripture. Much prayer went in this work.

OUR JOY AND DELIGHT

Why are you weighed down,


Let His light within,


Turn away from sin,


Cast your cares on Him,


My Savior and my God.


Let them lead me.


Bring me to Your holy mountain


To the place where You dwell.


My joy and delight.


Oh Lord my God, I come to You singing Your praise,


My joy and delight.


Lift us from the dark


Our Shepherd and our Guide.


Let them lead us.


Bring us to Your living water


To the throne of our King.


Our joy and delight,


Oh Lord our God, we come to You singing Your praise,


Our joy and delight.

The Lord will send


His faithful love by day


His song will be with us in the night

The Lord will send


His faithful love by day and night


A prayer to the God of my life


Our joy and delight

https://soundcloud.com/ken-paxton/our-joy-delight
Posted by Ken at 7:24 PM No comments: