A Legacy of the Unknown Soldier 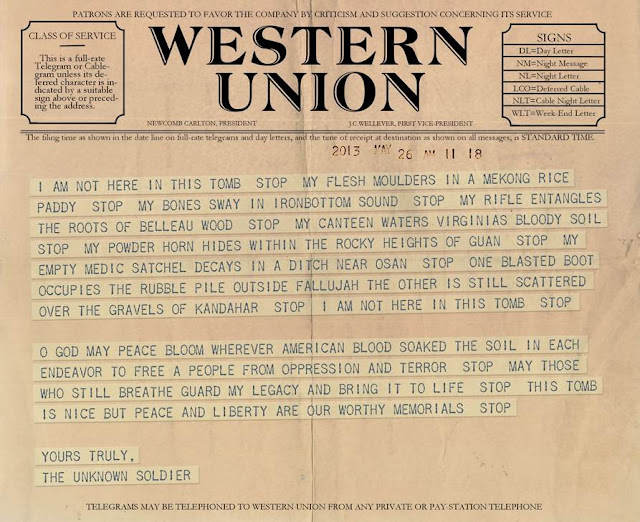 Our pastor preached on “Leaving A Legacy” today and mentioned listening to taps at the Tomb of the Unknown Soldier. So I wrote more than I listened…

There are two kinds of anonymous battle casualties to me. There is one whose whereabouts are known at the time of his death, but the means of his sudden departure from this world removes all trace of remains, whether to the wind, to the ground or to the sea. Then there is the more typical idea of an unidentified body placed in an unmarked grave. The Tomb of the Unknown Soldier is also called the Tomb of the Unknowns. It represents all military branches, women as well as men.

We could ask, however these souls lost their identity, what might be their legacy? How can those whose “floating” tanks sank beneath the English Channel on June 6, 1944 because the swells were too high, sending them to imminent death without hope of rescue who never fired a shot in battle; how can they leave a legacy, as badly as we all would want that for them, i.e. to not die in vain? What might these unknowns say about their legacy to us standing at the Tomb?

For the curious, some notes on the references above:
Mekong of course refers to the Mekong River Delta, the location of intense combat for years during the Vietnam War. This starts with Vietnam because it was my generation’s war. Sadly every generation gets one.

Ironbottom Sound is what the Allies renamed the Savo Sound north of Guadalcanal because about twenty five of our ships were sunk there in terrific WWII naval battles.

Belleau Wood is one of the first major battles fought in WWI by American troops alongside our Allies.

Virginia’s Bloody Soil is the name of a Civil War song, used here in recognition that about half of all casualties from both sides occurred in that state.

From Wikipedia, “The Heights of Guan was the New York colonial era name given to a series of hills which extend in a ridge along the northern portion of Long Island.” These were used as a natural defensive line against the British in the Revolutionary War. The Battle of Long Island was the biggest battle of that war.

Osan is the name of a small town in the northern part of South Korea. From Wikipedia, “On June 5, 1950 a U.S. task force of 400 infantry supported by an artillery battery was moved to Osan, south of the South Korean capital Seoul, and ordered to fight as a rearguard to delay advancing North Korean forces while additional U.S. troops arrived in the country to form a stronger defensive line to the south.”  Highly recommend their article on the Battle of Osan to understand a little of the terror our troops incurred there. These 400 with no tanks faced about 5000 with 36 tanks. The article continues later to tell of our retreat, “2nd Platoon, B Company, however, did not receive the withdrawal order. When the platoon discovered that it was alone, it was too late for an orderly withdrawal and it could not move its wounded quickly enough. Most of the survivors were able to escape captivity but a number of wounded litter-borne U.S. soldiers were left behind along with an attending medic. The American wounded were later found shot to death in their litters; the medic was never seen again.”

Dexter Filkin was an embedded reporter in Iraq and Afghanistan. His book The Forever War opens with the Second Battle of Fallujah, according to some our bloodiest battle in Iraq.